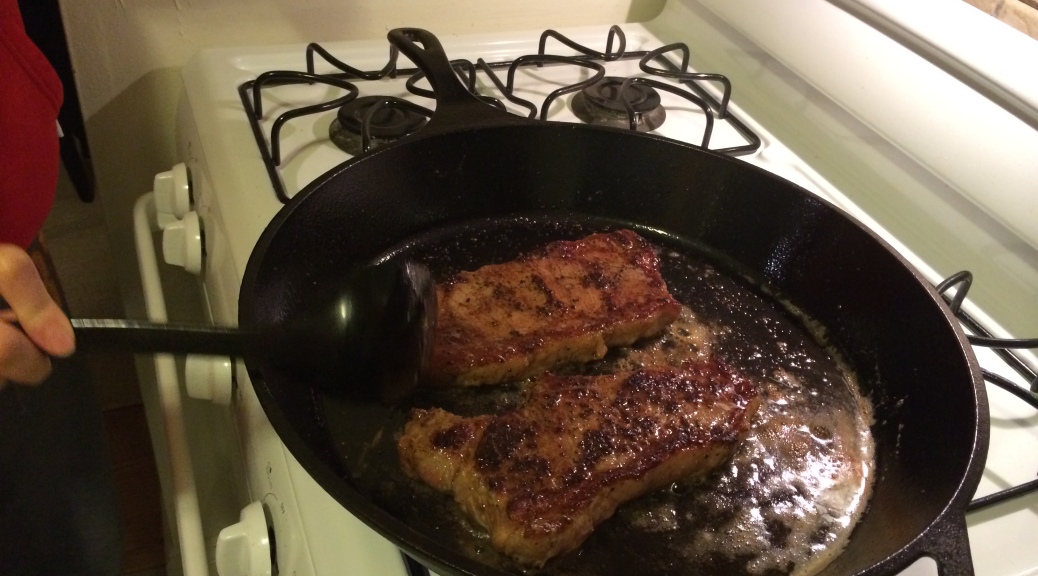 Over this past year, I’ve been thinking a lot more about making healthier choices.  But as someone who loves to eat (and loves to eat poorly) as much as I do, this is daunting task.  James and I decided to start small.  We love to eat and we love to eat meat – but there’s been enough studies that an abundance, shall we say, of red meat in your diet can lead to disease.  Therefore, we decided that we should try to cut back.  And the only way we thought we could stick with it was to make a hard, measurable rule: eat red meat only twice a month.
Red meat, by the way, has been defined by most nutritionists currently as “meat from any mammal.”  So it’s not just beef: it’s bison, it’s lamb, and saddest of all, it’s pork.  Perhaps, like me, you thought that pork was “the other white meat.”  Apparently, this is merely very excellent marketing by pork industry lobbyists.  Don’t get me wrong, there are cuts of pork that can be very lean, but at this moment in nutrition history pork is lumped together with beef as a red meat.
I mentioned that we really love meat in our house – and that’s how “red meat days” came about.  Instead of only eating red meat in two meals per month, we started to declare when we would take a “red meat day” and then try to fit in as much red meat as possible during those 24-hours.  We are… realizing that that’s sort of defeating the purpose and are trying to cut back on that trend as well.
However, we’ve made some really great discoveries with this experiment.  And the most obvious one is how much red meat we eat in this country – especially at restaurants.  James and I go out to eat a lot, it’s basically one of my favorite activities besides cooking in my own kitchen.  I love to be inspired by menus, I love a nice ambiance, great service – I love the whole experience.  But, as I mentioned in an earlier post, I can’t eat cheese.  And now I can’t eat red meat.  And holy crap, does that narrow down your choices!  The number of dishes that come with bacon alone are astonishing once you’ve limited the number of times you can eat it.
What’s also amazing is, although James is a great lover of bacon, we hardly ever eat it anymore.  Because when we eat red meat, we make it count.  It’s almost always steak.This Valentine’s Day, like last Valentine’s Day, we decided to stay home and make some delicious steaks.  We go out to dinner so often (probably too often) that it isn’t worth it to go out on Valentine’s Day.  They jack up the prices like crazy on this holiday, so why waste the money for the same food we could eat on another night?  No, damn the man.

Last year, I looked up a process to make the most delicious, crusty steak on your stovetop and in a pan, because my apartment is not grill-friendly.  I found the instructions on Serious Eats (a fantastic food website filled with both great instruction and foodie whimsy which I recommend).  This recipe comes from The Food Lab, when one of their writers heads into his tiny New York City home kitchen to test recipes and procedures ad nauseum until he’s figured out how the home cook can achieve great results in their own home kitchen.  Seriously cool. 🙂  There’s a lot of interesting little tips in this process, and I encourage you to read it, but below I detail the ones that I found most important and took to heart.

The number one intriguing tip is the suggestion that you flip your steak every 15 seconds.  I’d always heard that for the perfect sear you 1) get your oiled pan super-freakin’-hot, 2) slap your meat down and 3) DON’T MOVE IT.  You can test it after a few minutes and when the steak can be easily removed from the pan, that’s when you flip.  But this “15-second rule”, if you will, cooks your steak quickly and still achieves that crusty yum we all want.

(I want to admit that this was the first time we started taking pictures for the blog and so the 15-second-rule was kinda hard to capture.  We didn’t always achieve 15-seconds -often more like 30 – and I did overcook the steak more than I would have liked.  It was still good, though!  I recommend taking the steak’s temperature often so you can create the doneness you desire.)

Point 1: Choosing your steaks.
When I went to my local Trader Joe’s (the best prices on pretty much anything), I had four choices for a steak that was going to be the star of our meal: Filet mignon (often marked as Tenderloin), Sirloin, New York Strip and Ribeye.
From most to least expensive…
Filet  – I’d never attempted this cut before – actually a very lean cut of beef, yet very tender – and also the most expensive.
Ribeye – more expensive and highly marbled (those white lines of fat.)  My personal opinion is that the steak is too fatty for the cost – I don’t actually enjoy all that fat.
***New York Strip – This is the one we used and for me, the sweet spot.  Plenty of marbling and a price point (these were about $10 per steak) that I can get behind for a special dinner.
Sirloin – the least expensive and rather lean, but I find that it can be tough.

You also want your steak to be between 1″ – 2″ thick.  I think, for this application, I might have had more success with a thicker steak: it would have given me more time to create a crust yet not cook the inside so much.  You can see here that my steaks are 1″ thick.

Serious Eats suggests that you season your steaks more than you think you need.  I used kosher salt and cracked black pepper.  Freshly ground black pepper changed my life.  Cracking your pepper immediately before adding it to your food releases the oils in the peppercorn, making it more flavorful and offering more bite.

I like to season my steak on one side, add that seasoned side to the hot pan, then season the other side in the pan.  That way you don’t lose as much seasoning in the transfer. 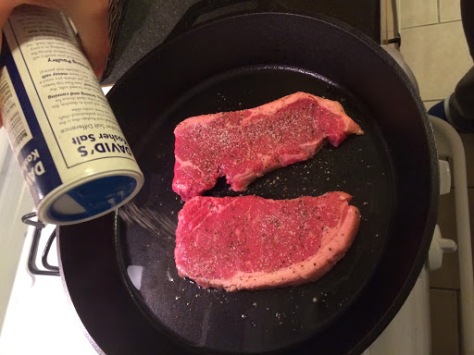 Point 3: 15-second-rule
This was the most interesting suggestion to me – one I had never heard before.  Flip your steaks every 15 seconds and take the temperature of the steaks as often as possible for proper doneness.  We like medium rate and 130 degrees is the target mark for such a meaty center.  (You can see the different temperatures for the different levels one doneness in the Serious Eats link above.)  You’ll want to cook your steak to about 120-125 degrees, because the carry-over heat will continue to cook the meat when it’s removed from the heat source.  I show the progression of my steaks below. 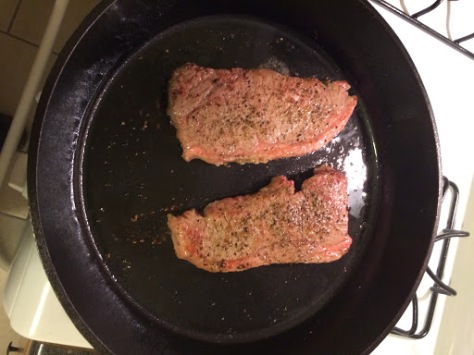 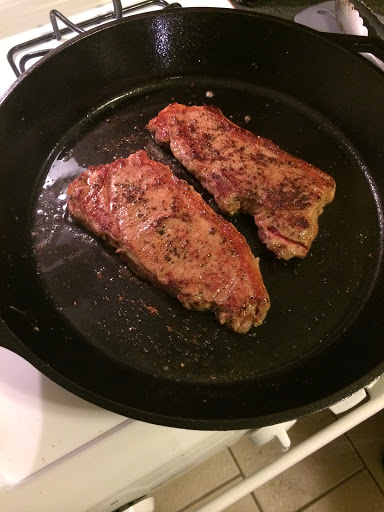 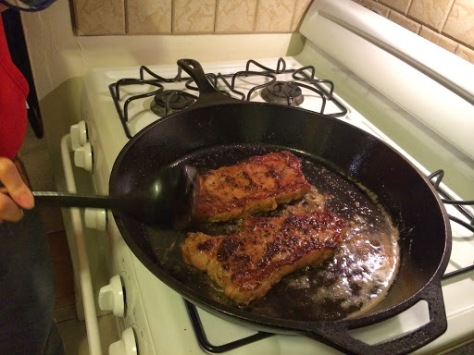 (You’ll see that butter was added to the pan and basted onto the steaks.  This was suggested, but I wasn’t a big fan of the result.  The idea is that the fat, an excellent conductor of heat, would get the the steaks crusty in places where the pan couldn’t touch, but I thought the addition of fat was overkill, and took away from the flavor of the steak itself.  Just my two cents, though.  I know most professional chefs add butter to their steaks at the end.)
The verdict: I still think that the easiest way to sear a steak is to get your pan hot and flip once.  There’s NO doubt that the 15-second flip is fastest way, but it’s just too much work, in my opinion.
The best lesson to learn here is to take the temperature of your steak often.  That will ensure the doneness you desire.
There you have it!  Know that you can have a delicious steak at home and it doesn’t have to be on the grill.  For the home cook you can have it fast with a few simple guidelines in mind.
Have you made steak in a pan at home?  Have any tips, questions, comments, concerns?  Hit me up in the comments.
2 Comments: 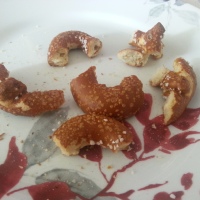 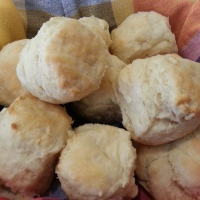 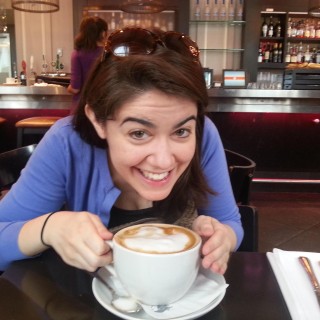